Welcome back after an amazing, action-packed World Incubation Summit 2019!

This article is a recap of the WIS19 events that includes the top Tweets, inside stories, and descriptions of the superstar speakers that joined us during the summit. Even if you weren’t with us in Doha for the WIS19, you will appreciate this interesting overview of key events and a snapshot of what happened during the summit.

Many attendees arrived in time to catch up on work and rest before the evening’s welcome ceremony and networking. The excitement was building among the attendees as we gathered in the Grand Hyatt garden for delicious food and welcome speeches given by UBI Global’s Ali Amin along with Ibrahim Al Mannai, Executive Director of Advisory and Incubation, Qatar Development Bank, the host of the WIS19.

The WIS19 group absorbs information about Qatar during the guided tour of the National Museum of Qatar.

Next, the group moved on to the National Museum of Qatar to learn more about the country. In this amazing space, we learned about the history of pearl diving, which was Qatar’s main industry for thousands of years until the early 1940s when oil and gas took over. Of special interest during the guided tour was the desert rose, a naturally formed cluster of gypsum found in the desert of Qatar and is the inspiration for the architectural design of the museum itself. 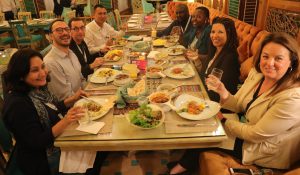 After the museum tour, the group journeyed to the Souq Waqif, a vibrant marketplace that includes spices, traditional garments, handicrafts, souvenirs, and dozens of restaurants. Encouraged to network, the WIS19 attendees gathered in groups for a taste of Doha at six different restaurants. One group consisted of seven innovation ambassadors, advisory board members, WIS19 speakers, and all-around great people:

The evening was a great introduction to Doha – the Qatari hospitality, meeting new, like-minded people, networking with peers, and great discussions all contributed to whet everyone’s appetite for more the next day.

Many WIS19 attendees were up with the sun and ready to ‘asana’ in the Grand Hyatt garden with a yoga class. It was a great way to start the day – thank you to all who joined the group! Then it was off to the opening ceremony. Every great event has a Master of Ceremonies, and the WIS19 was lucky enough to have Dalal Mohammad. Thanks to Dalal, we all kept up on who was who, what was next, and where we should be!

Officially welcoming the attendees on Best Practices Day were two compelling speakers – Abdulaziz Bin Nasser Al-Khalifa, the CEO of Qatar Development Bank and UBI Global’s Ali Amin. The audience was rapt for these two, as they outlined the goal for the conference and what would happen over the next few days. Attendees were then honored to hear an address from H.E. Mr. Sultan Bin Rashid Al Khater, the Undersecretary of the Ministry of Commerce and Industry in Qatar, who offered a fascinating picture of the innovation ecosystem in the country. 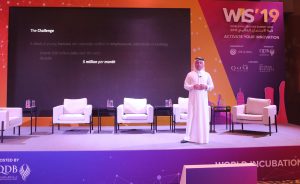 Dr. Khalid M. Al-Ali gives the keynote address, “A String of Pearls,” to the WIS19 attendees on Best Practices Day.

Lending star power to the opening day of WIS19, Dr. Khalid M. Al-Ali is internationally famous as an entrepreneur, visionary, and star of the popular reality TV show, “Stars of Science.” We were lucky enough to get a one-on-one interview with Khalid before his keynote address, which we will share soon! Khalid’s keynote address, “A String of Pearls,” was inspiring and illuminating, giving the audience a real sense of urgency on the need for new job creation, training, and education.

Best Practices Day included sessions featuring speakers who would eventually be announced as the number one and top listed programs according to the World Benchmark Study 2019 – 2020. Dr. Khalid Al-Ali stayed to enrich the audience on the topic of building successful innovation ecosystems. Moderated by Holger Meyer of UBI Global, the session also included Shahida Saleem of PEP Foundation, Yan Zhenjun (Roy) of CKGSB and Kurt Höller of EIT Health.

Attendees then broke into groups and concentrated on a region of the world according to their location or interests. Groups included Best Practices from Africa, Asia-Pacific, Europe, MENA, and the Americas. After a great buffet lunch that included a keynote address by Richard O’Kennedy of Qatar Foundation, presentations resumed with three incomparable speakers. Entitled Visions, Missions, and Sustainable Business Models, the attendees were given inspirational overviews of three very different but very successful programs – Chicago’s 1871 by Betsy Zigler, Italy’s YAR by Adriano Marconneto, and GVA by Zamir Shukhov. Following these exciting speakers, the audience understandably had great questions before the break-out panel discussions began. Discussions focused on creating value – for the ecosystem, for client startups, and for programs themselves.

UBI Global member programs that participate in the World Benchmark Study have demonstrated a very important trait; their startups are more successful. With a 5-year average survival rate of 59 percent, UBI Global member programs outperform non-incubated startups by 15 percentage points. The programs in the study supported ventures with over $3.2 billion in sales over the past five years. These are the Best Practices shared during WIS19! 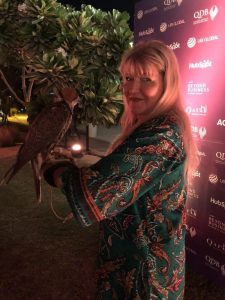 There was just enough time to collect the notes from the panel discussions, freshen up and head out to the beach area at the Grand Hyatt for a traditional Qatari dinner! Featuring traditional music, dancing, a falcon on display, and a plush tent to relax under, attendees were amazed by the lavish reception. Then it was time for the Top Challenger and Most Promising Announcements! With the Qatar skyline surrounding us, the warm night air and the ocean breeze, it was a magical night.

WIS19 attendees were invited to submit photos to the Whova app and join a contest for the best photo. It’s no wonder the winning photo was from this magical night.

Find out which programs came out on the World’s Top Lists and the World’s #1 programs in their respective categories – download the all-new report here!

As UBI Global member business incubators and accelerators will attest; our partners are the very heart and soul of what we do. It is the same with the WIS19, so let’s take a minute to acknowledge the tremendous partners who made it all possible.

Qatar Development Bank were the most gracious hosts we could imagine for the summit. More than hosts, QDB made all of us feel welcome and engaged in their exciting local innovation ecosystem. We may have started out with a partnership, but now we are more than friends. Thank you, QDB! 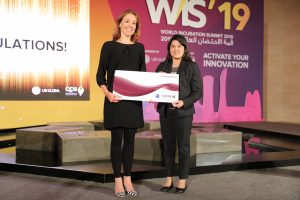 Congratulations to Hanneke Mallegrom of RMIT, Australia who was the lucky winner of a round-trip ticket from Qatar Airways Beyond Business!

Qatar Airways and the Beyond Business Program, Hubspot, JU&O, Qatar Science & Technology Park and visitqatar.qa provided services, presence, organization, and information so that the WIS19 ran smoothly for one and all. It was especially great to have Qatar Airways Beyond Business participate in the WIS19 by being available in the foyer area to introduce attendees to their great program. They also gave away a business class ticket to a lucky attendee!

We can’t say ‘thank you’ enough to the outstanding speakers for WIS19, who gave their valuable time to enrich the content of the summit. Visit the Speakers page and connect with them on their individual LinkedIn Accounts!

Throughout the week, attendees were avidly using the Whova event app to create networking opportunities. We witnessed impactful collaborations between many different groups including Product Market Fit, Intelligent Incubation, a Curriculum Exchange, Virtual Incubation, Blockchain, Professional Development, FutureTech, and more. Focused regional meetings were also scheduled between members from Pakistan, India, China, Qatar, Doha, and more. Great job in maximizing your trip to the WIS19 everyone!

The theme of the day was Partnerships, but the underlying buzz was all about the UBI Awards Gala taking place that very evening. Thankfully, the day’s agenda and speakers were so excellent, the attendees almost forgot what an important event was taking place that evening. Almost!

WIS19 attendees started the day off by activating their inner selves with a yoga session.

Another yoga session started everyone off on the right foot for a keynote by Tshimologong Digital Innovation’s CEO, Lesley Donna Williams. Focused on breaking barriers and creating partnerships, Lesley was the perfect opening for the day’s topics that included discovering sources of funding, seeking corporate partnerships, leveraging industry associations, and navigating university partnerships.

After lunch and a keynote address from Anthony Herman of Amazon Web Services VC, panel discussions continued with topics such as third-party tools and services, more on corporate partnerships, and sources of funding. The second set of panel discussions focused on female entrepreneurship, talent diversity and inclusiveness, and future technologies. 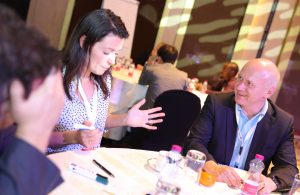 Interactive Workshop sessions were a big hit during the WIS19.

Partnership day went by fast, with scores of meaningful connections, inspiring goals, and success stories to emulate. I think the attendees were all ready to celebrate – and there was just enough time to dress up and head to the Islamic Museum of Art for the UBI Awards Gala Dinner! This is where the business incubators and accelerators gathered in Doha would learn which programs were named number one in the world! 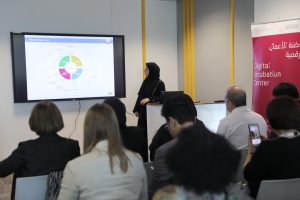 WIS19 attendees get an overview of activities and success at Doha Incubation Center.

Featuring a tour of the three most important innovation programs in Doha, Local Ecosystem Day was an event not to be missed during the WIS’19. Attendees began their tour with an overview of activities and startups at the Digital Incubation Centre (DIC), which was given by Duha Al-Buhendi, the Manager of DIC. A wall of logos with the names of successful startups greeted the crowd, who were then treated to elevator presentations from three of the startups currently at the DIC. 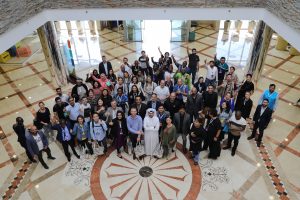 An inspired group of WIS19 attendees after a tour of QBIC.

Then the group was on to Qatar Business Incubation Center, where we were greeted by a startup with the technology to make edible drinking straws, which was very interesting to many attendees. In the impressive auditorium, attendees were treated to an overview of the services offered at QBIC thanks to Hamad Al-Qahtani, General Manager, as well as two compelling presentations by current startup clients. After a group photo, it was on to the final stop! 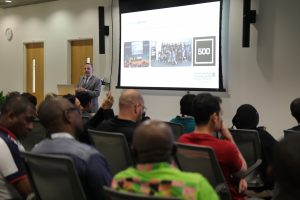 QSTP was the final stop on the WIS19 tour, where attendees were inspired by the sheer size of the facility and the professional atmosphere.

Qatar Science & Technology Park is a truly impressive, modern facility with thousands of square feet devoted to innovation. Attendees listened to the details of the technology-focused program and facility, and their 12-month incubation objectives. Covering everything from prototyping to mentorship, QTSP has a focus on creating local technology entrepreneurship in Qatar.

Top Tweets from the Event 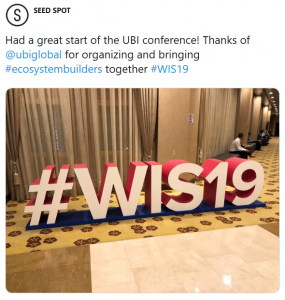 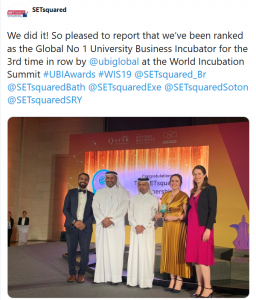 The WIS19 was truly an enriching experience for the attendees, all of whom worked hard to network and meet new mentors and friends during the summit. With the theme of “Activate Your Innovation,” the summit provides multiple opportunities for attendees to learn, grow, and become more successful. See more photos from the WIS’19 on the UBI Global Facebook page!

Find out which programs came out on the World’s Top Lists and the World’s #1 programs in their respective categories – download the all-new report here!