STOCKHOLM, SWEDEN – UBI Global, an intelligence company and community founded in 2013 and located in Stockholm, Sweden, announced today that Fredrik Grufvisare has been appointed to the role of CEO. Ali Amin, Co-founder and former CEO of UBI Global, will remain with the organization as the Chief Commercial Officer.

Fredrik comes to UBI Global with a strong sales background, having led the team of Studentkortet Sverige AB through an explosive growth period for the brand and eventual successful expansion and acquisition. Though Grufvisare wasn’t seeking a career move, he was excited and intrigued about UBI Global after attending an event featuring a speech by Ali Amin.

“We started talking and two hours later, we were still in the empty auditorium and our ideas had covered every square inch of a small whiteboard left behind by the staff,” said Grufvisare, “Ali and the UBI Global team had done a tremendous job growing an international community, arranging the World Incubation Summit, and creating the now renowned benchmark framework that makes the World Benchmark Study and Ranking possible.” 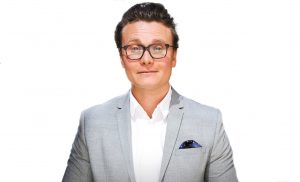 Grufvisare is a graduate of Uppsala University in Sweden with two BSc degrees, one in Political Science and Government and the other in Business and Commerce. Fredrik also earned a BComm degree in Business and Commerce from the University of Melbourne. After completing his education, Fredrik worked in a few sales leadership roles, including Head of Sales for Studentkortet Sverige AB, where he eventually moved into the leadership role as the company experienced a disruptive digital transformation from within.

Future plans for UBI Global under Fredrik’s leadership will include nurturing and developing the cornerstones already in place to create new, exciting features and business intelligence tools that will bring further value to the UBI Global innovation community and to the thousands of exciting startup clients they nurture into healthy, successful companies.

UBI Global is a Swedish-based intelligence company and community specializing in mapping, highlighting, and connecting the world of business incubation. Through a network of more than 1,200 member organizations from over 90 countries worldwide, UBI Global provides matchmaking, benchmarking, and research services to corporations and business incubation programs. Celebrating the recent success of the World Incubation Summit 2019, where the organization announced the World’s #1 and top-listed business incubators and accelerators, UBI Global continues to achieve worldwide success as the leading authority on innovation programs.

Known worldwide as the gold-standard map of the impact and performance of business incubators and accelerators, the UBI Global World Benchmark Study report is now in its fifth edition for 2019/2020. The new edition of the study includes not only university-linked incubators and accelerators; for the first time, it also includes public, private and corporate programs. The new edition of the World Benchmark Study 19/20 will be available on January 31, 2020, from the company’s Publications store, and is free of charge to members of UBI Global.

Providing rich data on the innovation ecosystems in 82 countries, the WBS19/20 presents an honest view of startups, technology, and investment opportunities from the world’s top incubation and acceleration programs. Previous results from UBI Global’s studies have been featured on BBC Radio, The Chicago Tribune, Le Figaro, Der Standard, The Huffington Post, The Irish Times, France 3, and other media outlets around the world.